Chelsea cemented their grip on fourth place in the Premier League as Kai Havertz finally delivered an influential display in their vital 2-0 win against top-four rivals Everton on Monday.

But the Germany midfielder was given a rare start by Chelsea boss Thomas Tuchel and he responded by playing the key role in both goals at Stamford Bridge.

Havertz’s shot was deflected into the Everton net for a Ben Godfrey own goal in the first half.

The 21-year-old has not scored in the league since October but Tuchel entrusted him with an important role as Chelsea’s false nine. His intelligent movement put him in position to earn the second-half penalty that Jorginho converted.

“We deserved to win, we controlled it completely,” said Tuchel.

“Second half we increased our level and had a lot of dangerous attacks.

“Very pleased with Kai. It was the trust we gave him. He used that trust. He is a player who has all the ability to be a dominant figure in the attack and he stepped up.”

Chelsea are now four points clear of fifth-placed Everton, although West Ham would close the gap to two points if they beat Leeds later on Monday.

The west Londoners are unbeaten in 11 games in all competitions — winning eight times — since Tuchel replaced the sacked Frank Lampard in January.

Their renaissance under Tuchel is a credit to the former Paris Saint-Germain boss, who is the first manager to see his side keep a clean sheet in each of his opening five home Premier League games.

On current form, Chelsea look a good bet to qualify for next season’s Champions League via a top-four finish, while they still have aspirations to win this season’s competition after beating Atletico Madrid 1-0 in the last 16 first leg.

“You see the quality of the players. It is a pleasure to be on the sideline and work with the team. Everybody in the club is doing everything to compete at this level,” Tuchel said.

Everton’s first away league defeat since November was a significant blow to their hopes of a top-four place.

“We have to be honest, we are not at the same level as Chelsea,” said Everton manager Carlo Ancelotti.

“We cannot play an open game against this kind of team.

“We are looking to fight for Europe. We are disappointed for this defeat but no tragedy.”

Tuchel made five changes from the 1-0 win against Liverpool last Thursday as Havertz and Callum Hudson-Odoi came in.

Making way for Havertz was Mason Mount, whose superb performance and clinical finish had inspired the victory at Anfield.

But Tuchel’s tinkering didn’t unsettle Chelsea and they dominated possession from start to finish.

Jorginho twice fired narrowly wide in the opening exchanges and Chelsea’s pressure was rewarded with a stroke of luck in the 31st minute.

Hudson-Odoi made a purposeful burst in from the left and picked out Marcos Alonso’s run into the Everton area.

Alonso swiftly whipped a cross towards Havertz and his volley took a wicked deflection off Godfrey as it flashed past wrong-footed Everton keeper Jordan Pickford.

The revitalised Havertz turned to fire past Pickford early in the second half, only to see the goal disallowed by VAR after he controlled the ball with his arm.

Everton barely troubled Chelsea goalkeeper Edouard Mendy for nearly an hour and even when Richarlison had a clear sight of goal, the Brazilian slipped and miscued his shot wide.

A second goal looked inevitable and it duly arrived in the 65th minute.

Havertz was clattered by Pickford and Jorginho dispatched the penalty with his customary hop step. 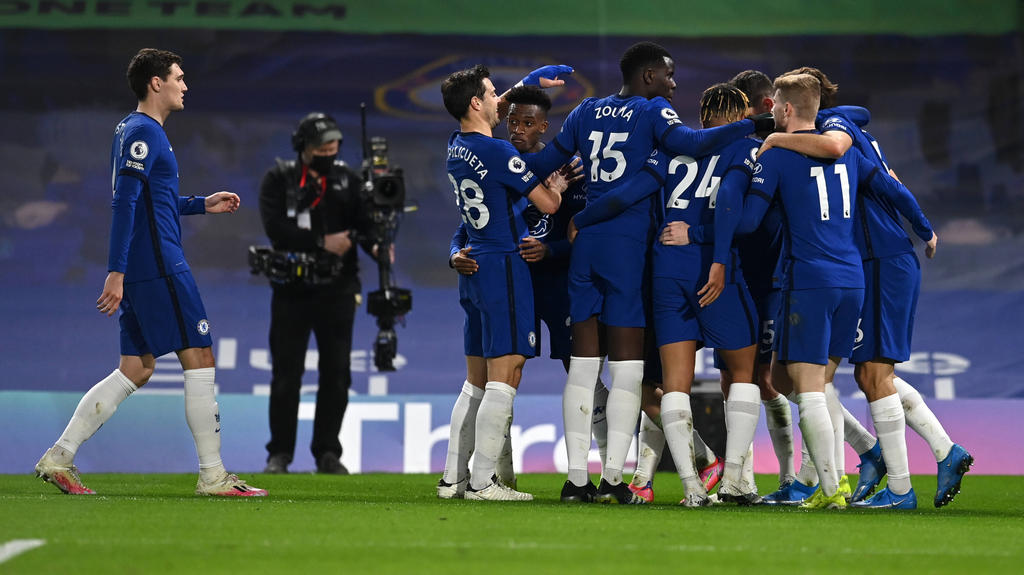